You Hired the Wrong Salesperson. Now What?

You Hired the Wrong Salesperson. Now What?

Bad hires happen. No matter how rigorous your hiring process is or how high your standards are, a bad apple eventually gets through. And in the world of enterprise sales, where turnover is rampant—34 percent is the annual average—and sales teams are constantly backfilling, speedy hiring processes are often the norm, which only increases the chance of a bad hire slipping through.

Worse, replacing a single bad hire can cost nearly a quarter of a million dollars, including sourcing, hiring, and training—along with the lost productivity your team will experience as your new seller ramps up.

When bad hires happen, what should you do about it? And how do you minimize the negative impact to your existing team? To find out, we sat down with one of our Emissaries – the Enterprise Sales Director of a large global analytics firm.

It takes an average of six to nine months to get an enterprise rep fully onboarded and up-to-speed. So after that onboarding period ends, you should expect to see some production, right?

“There’s so much that goes into the sales process, and it’s easy to point the blame at the seller—but before you do, you’ve got to make sure you’ve investigated the underlying factors,” he said.

Those factors include lead volume, lead quality, territory size, territory quality, and the length of your average sales cycle.

“In enterprise SaaS, you’re looking at sales cycles that usually take six months or more,” he noted. “If your rep spent the first month or two learning your product end-to-end and getting to know how it solves your customers’ problems, they’ve only really been selling for four or five months. That’s not enough time to make a meaningful contribution.”

In addition to not giving your rep a fair shot, our exec made the point that giving a seller the axe without communicating what’s expected and when can create a toxic environment with the sales team.

“When you fire a seller—or anyone, really—without communicating clear milestones along the way, others on your team are going to wonder: ‘Am I next?'” he said. “That’s why you need to make expectations clear for new hires on a month-to-month basis. By the end of month one, they should have learned X. By the end of month three, their pipeline should contain at least Y leads. That way, it’s never a surprise when they get put on a PIP or get let go.”

“Culture” is a buzzword in business today, and with good reason. Company culture can be a determining factor in whether employees stay or go, and a full 82 percent of respondents to a Deloitte survey said a strong culture can deliver a competitive advantage. But when it comes to finding—or firing—sellers, our exec urged organizations to take a decidedly measured approach.

“Company culture and team culture are very important, but they are rarely the reason for a defensible termination,” he said.

That, he noted, is because sales is a slightly different beast than, say, product development.

“A lot of sellers’ time is spent solo, so you’re not always interacting with the broader team as much as you will be in other functions,” he said. “Your performance is also dictated by a much simpler set of metrics. Are you hitting the ball, or are you not hitting the ball?”

Sales culture often involves celebrating big wins, and that usually involves a drink or seven at your local watering hole after work.

“If you’re going to leave work at five to spend time with your kids, that’s fine as long as you’re hitting the ball,” he said. “I don’t care about that sort of thing from a cultural standpoint. If you’re getting the job done, being an introvert or having a different work style or not spending time with the team after work isn’t something that should matter.”

There is one area where culture fit should influence a firing decision, however.

“The best sales cultures are competitive, but not cutthroat,” he said. “You’re going to be upset when you lose a deal, but you’re also going to be happy for a colleague who just closed one. If you’ve got someone who’s actively trying to sabotage someone else’s performance so theirs looks better, however, you’ve got to get that person off your team as fast as possible.”

And finding out if you’ve got a person like that on your squad shouldn’t be difficult.

No Alarms, No Surprises

That communication piece, our exec said, is especially key for managing morale after a termination has been made.

“If you’ve looked at the lead quality, the pipeline, and all the other factors, and you’ve determined this person really isn’t getting the job done, you need to explain that to your team immediately,” he said.

He stressed the value of getting your team in a room and explaining what went down—and why.

“It’s all about standards. When you have benchmarks and milestones in place, you can provide objective reasons for putting someone on a plan or eventually letting him or her go,” he said. But he also noted that many sales teams today—even at the enterprise level—lack these fundamental metrics.

“Earlier in my career, I was selling SaaS on a team that had no standards in place whatsoever,” he said. “So whenever someone was let go, they couldn’t give us a satisfactory explanation. Sometimes, the CRO would just say: ‘He clearly wasn’t getting it done.’ We’d look across the room at another seller who was hired at the same time and was delivering the same numbers and wonder if the CRO just got up on the wrong side of the bed.”

That, he said, led the team to be permanently looking over their shoulders, wondering who would be next. If, on the other hand, there had been clear expectations in place and those expectations had been communicated to the team, none of that would have been necessary.

“In my current role, I’ve been very mindful of benchmarking,” he said. “My team knows what they’re supposed to have learned in month one, how many meetings they should’ve shadowed in month two, how many leads they should be pursuing in month three, and so on. That way, you’re either performing or you’re not. There’s no black box. No guesswork.”

He added: “I’ve also made it very clear to my team that I’ll tell them when they’re heading for a PIP. No one’s going to walk in one day and be surprised by getting put on a plan.”

Don’t Depend on the Deep End

Once you replace your bad hire, you’ve got to get them up to speed as quickly as possible. Unfortunately, our exec said, too few sales teams have formal, realistic training programs in place.

“In most organizations, training for sellers is very loosely defined,” he noted. “Most places just kind of throw you in the deep end and wait to see if you swim or sink.”

This usually involves shadowing other sellers’ calls, learning from product teams, and practicing on low-level leads—all in a very unstructured, haphazard way.

As Trish Bertuzzi, president and chief strategist for sales consultancy The Bridge Group, put it:

“This makes about as much sense as teaching someone to drive by having him or her sit in the passenger seat for two weeks. Observation alone is great for being able to identify a good driver. But it’s a terrible strategy for becoming one.”

As a result, new sales hires often experience the cycle illustrated below: 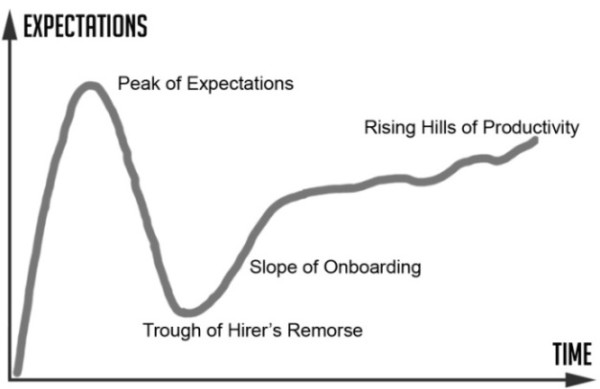 All too often, in other words, sterling interview and hiring processes are followed by lackluster training programs, leading to slow ramp-ups and low initial productivity. To our exec’s point, this leads to hiring remorse—but in reality, dumping your new seller into the deep end doesn’t set him or her up for success. In fact, most companies today spend up to $15,000 in hiring costs on a new seller, but just $2,000 on training.

To enable your latest hire to survive and thrive, you’ll need a structured training program with clear milestones along the way. Of course, every ramp period will vary depending on your product and your prospects’ sales cycles—but it’s up to you to document this knowledge via a clear, understandable, and repeatable training plan. Since sales training is such a huge topic, we’ll explore it in depth in a subsequent post, but HubSpot offers a solid overview of how to build a training framework here. The most important thing is not expecting your sellers to undergo a self-driven training regimen—as far too many SaaS firms today do. Instead, institute a structured approach with clear expectations and milestones every step of the way.

With high turnover, speedy hiring processes, and aggressive ramp times, enterprise sales teams are almost guaranteed to occasionally hire sellers who just don’t cut it. That’s a given. What isn’t a given is how—and when—sales leaders identify underperformers, communicate expectations, and implement robust training programs. By having as much insight into where sellers fail and providing training frameworks that solve as many of those problems as possible, sales leaders can not only gain more control over new sellers’ performance, but empower them to deliver more value to the enterprise.

Hiring will always be a gamble, sure, but savvy sales execs have a number of weapons in their arsenals to make the odds a lot more favorable.