Global Priorities in the Telco Sector 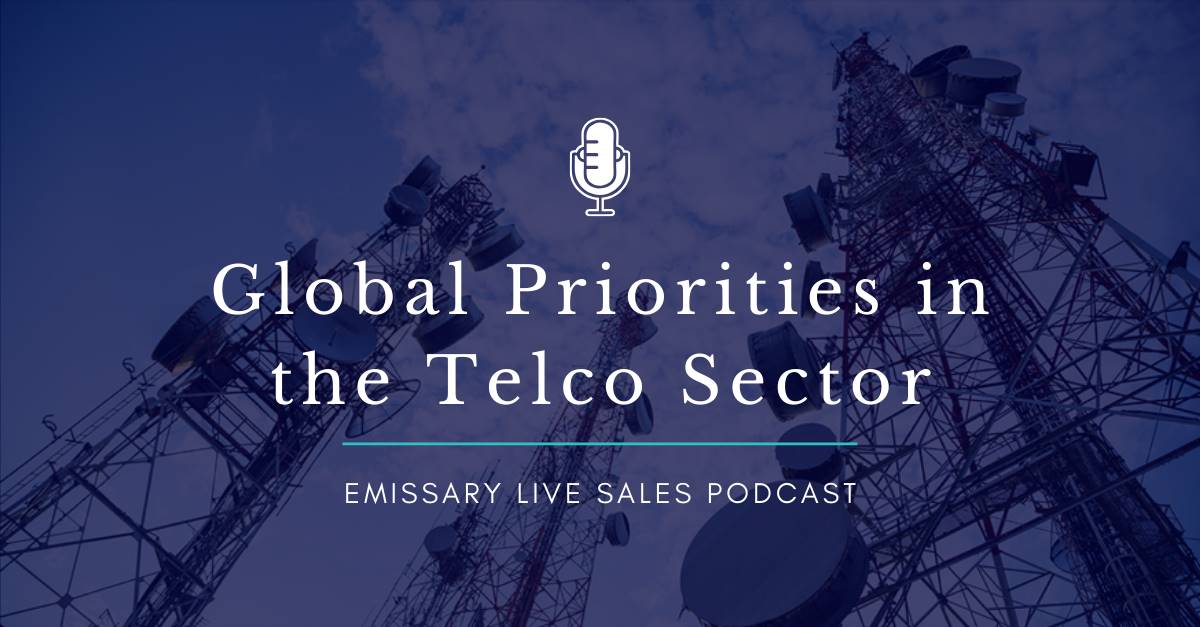 In this episode of Emissary Live, we heard from Dave, former VP of Global IT at BT, British Telecom. Here are just a few of his insights on navigating the telco industry, gained from 30+ years of experience as a telco executive.

Six key takeaways from the conversation:

Are there any landmarks as far as business needs or business concerns where telecoms focus that you think vendors really ought to be able to demonstrate competency regarding? Any consistent qualities or technological needs that you think vendors would do well to understand and also understand how those business needs would impact their specific solution, even if it’s not directly?

We’ve talked about the need for driving innovation. I think like many companies in many, many different sectors, the legacy telcos or the telcos that’ve been around for a number of years definitely have a challenge in terms of how best to exploit cloud by SaaS services, how to make that work, and how to migrate from their existing real estate onto that kind of a platform. So that’s one area in which people coming into the telco space for the first time have an opportunity to look at how they can address that.

The other big thing in the telco space that I think has been a common theme for some time is wrapped around data. And that’s both the management of data – how to govern data, how to make sure that the data works – but also increasingly I come across telcos looking at how they can drive insight from that data, and also how they can then use that to drive AI and machine learning type applications through their businesses. It is a period in history I think where there is a significant change going through the telco business and the speed with which the telco business needs to operate. And increasingly, I think telcos are looking for vendors to come and support that process.

Are there any pain points within telco that you would call out as being especially relevant right now? What’s sort of on everybody’s mind currently as far as what is really preventing some of this innovation, and preventing some of the agility that telecommunications firms are looking to make part of their foundation?

I think the biggest issue that telcos general have – and BT definitely has, it was announced on the quarterly results call a couple of weeks ago – is dealing with system complexity. So, looking at it from an IT viewpoint, as the years have gone by and systems have been developed and introduced to serve an ever-widening portfolio of products and capabilities, that obviously has led to a massive complexity of system of state. And it’s that that really prevents the agility that the telcos need.

You’re faced with this dilemma, which is you would have to take all of the capital investment that you would typically make as a telco in a year or several years to throw at the problem of transforming the existing estate. But at the same time, you need to be able to invest in this innovation. So again, my friends in the telco industry are still doing this, are still grappling with this problem every year. Which is, how do you get that balance right between transforming the old and innovating for the future?

Are there any qualities that you would call out as especially disruptive to a positive vendor relationship with BT specifically, or maybe just telecom generally? What are some of the qualities that vendors demonstrate that lead them into trouble, either in the initial stages or once they’re carrying out an initial contract?

I think certainly in the initial stages, the thing that I see and I’ve seen probably too many times unfortunately, is a vendor that gets too focused on their product for too long in that conversation. And so it’s almost, bear in mind that you’ve got a window of opportunity to explain how you can solve the problem of the person sitting across the desk from you. And what I see too often is somebody telling me how if I lived in a perfect world or the world that they imagined, my life would be perfect. And of course I’m not sitting in that place, I’m sitting in a place when I’ve got real problems to solve.

To give you an example of that, I remember a vendor who came to sell me an analytics platform, which basically he spent 15 minutes telling me how this platform would be of great benefit because I would be able to take data from a wholesale business and use it to drive retail sales, something which is actually prevented in the UK by the regulator. So I’ve got somebody sitting in front of me telling me a solution which I cannot implement. And that’s just getting back to that lack of homework, inability to make the pitch in a way that resonates with myself and the problems that I’m facing the opportunity that I’m facing.

What can vendors do to open doors for themselves as far as how they facilitate a trial, or build trust in those initial stages?

It depends largely as to where the pitch is being targeted and of what purpose. So in an area where what you are presenting is a means of driving innovation, then what works I think is finding the people within the business community and also within the CIO communities or CTIO communities within BT and working with them on the problem areas that are in the ‘too hard to deal with right now’ category. And if you can pick those up and recommend doing a POC or some kind of trial type capability, I think that does work very, very well.

I think where I would caution against that is obviously if as a vendor, what you’re actually doing is making a pitch which is essentially selling an equivalent technology or an equivalent capability, and what you aren’t doing is attempting to address the situation from a price viewpoint or a quality viewpoint. And actually there I would suggest that reference sites are even more important. So if you say, “I can come in and reduce your total cost of ownership in a particular space by 60%,” point to some other telco of equivalent size that’s prepared to make to the reference site. And say, “Look, we did it there and therefore we could do it with you.”

For more insights like this from former executives from major global organizations like BT, you can connect with one of the thousands of advisors in our network from Fortune 1000 firms. Contact us here to see what an Emissary can do for your business.