Emissary of the Month: Chris Johnson

November 13, 2018 in Emissary News, Emissary of the Month, Enterprise Insider

Chris Johnson, former director of global enterprise architecture at Harley-Davidson, is a true Emissary rockstar. After stints as both an army infantryman and a guitar student at the Berklee College of Music, Chris moved to California, where he played the Bay Area rock club scene with some very notable musicians, including members of 38 Special and Night Ranger. Today, however, he’s taken his talents to a different arena.

These days, Chris is an accomplished IT leader who’s built an impressive career with organizations like Harley-Davidson and MillerCoors.

He’s got insight into the future of IT sales and advice for enterprise sellers on why they need to start building better relationships with decision-makers across all teams. 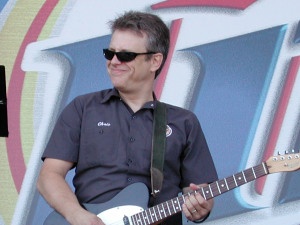 Fatigued by life on the road and looking for a change, Chris found his new calling by chance, when his father, the chief engineer at a local radio station, asked him to help program broadcast routers that the engineering team was struggling to repair. Chris programmed them quickly, and discovered he had an aptitude for computing—a natural predilection made stronger by the skills he honed from his years as a musician:

“There is a very creative aspect to technology and problem-solving,” he said. “Innovation, ideation, and creation of initiatives all benefit from a creative mind.”

After going back to school and working his way up through the ranks at companies like MillerCoors and Whitman Hart, Chris found himself as the director of global enterprise architecture at Harley-Davidson. The company was transitioning from a North American brand to a global one, and Chris was tasked with modernizing the company’s IT infrastructure to prepare for the expansion.

“My team developed a five year, $50 million strategy out of my office to reduce risk, renovate, and innovate all of the technology investments for the company at the same time that it was growing around the world. We had to think of global solutions rather than local solutions.”

Working with the company at two very different phases, one smaller and one larger, exposed Chris to the differences between leadership at all levels. For instance, it’s much easier to ask for ten million than ten thousand dollars, he found. “At the higher level, decision-makers are focused on outcomes rather than the ‘how to’ of a new initiative. When focused on mid-level efforts, though, stakeholders want more details and tend to prioritize more of the executional aspects over the outcomes.”

Enterprise sellers, he believes, should keep this in mind and adjust their selling strategies accordingly.

“I think it’s critical to speak to varying levels of leadership to get several perspectives on what it will take to drive transformation,” he said. “You have to navigate a lot of altitude. They need to understand how to position their product differently for leadership, management, finance, and operational personnel.”

Software as the future of service With corporate business functions now involved more heavily in the overall decision-making process, Chris believes today’s sales professionals must learn how to build and manage relationships with their corporate IT counterparts if they want to be successful.

As always, keeping service offerings current will be crucial, too. The future, as Chris sees it, lies in software tools and empowerment. As the fast pace of change continues to disrupt the landscape, infrastructure as a service will be replaced by more flexible, software-based solutions.

“The next generation is about interoperating between disparate clouds,” he noted. “Harley-Davidson consumed both Salesforce and SAP, and then integrated Acxiom, so we had to find a way to connect those systems. Get yourself a service model focused on value and outcomes, and make sure it’s agile. Buyers can’t afford to make hard commitments anymore because the pace of innovation is so fast.”

With an increasingly crowded marketplace, organizations are starting to become paralyzed by all their choices. Offering low-commitment subscription-based services can help assuage buyers’ fears and lead to new business that otherwise wouldn’t have been won.

Large enterprises aren’t the only ones overwhelmed with offers from today’s IT vendors—nonprofits are major targets too. But these organizations, Chris noted, often don’t have the kind of specialized knowledge they need to make informed buying decisions. To help address this gap, Chris started volunteering with the Wisconsin IT Advisory Council in 2011, with the goal of helping ensure that nonprofit groups were getting the services they needed at a fair price.

“If you don’t have a rich background in technology, it’s difficult to understand how to make good investments. Our focus was helping nonprofit clients read through a contract and understand exactly what they were signing up for.”

Helping others to better understand technology also served as the foundational philosophy for Chris’ company Meaningful Werks. The world of IT moves at such breakneck speed that keeping up with the latest developments and leveraging them to their full potential can be challenging, especially since the goalposts are always moving.

“Meaningful Werks is heavily focused on next-generation machine-learning and big data modeling,” Chris said. “We’re helping people understand a very misunderstood space, which is a big passion of mine. The parity between business and information is almost equal right now. Applications are great, but technology has become commoditized, so we aim to help people sort through all of these data opportunities.”

Lately, though, Chris has taken up a new, more immediate mission in the wake of Hurricane Michael, embarking on a search for new technologies that can help people stay in touch after catastrophic storms.“

“I was so profoundly impacted by what I saw in Mexico Beach from Hurricane Michael. I noticed that while cell phone coverage was down, a lot of data and satellite services weren’t. My neighbor actually called me on an Amazon Echo and we were able to communicate through these devices. So now I’m focused on uncovering new ways to help people stay connected during natural disasters so they can get the emergency services they need.”

His commitment to helping those in need translates well to his work with Emissary.

“I enjoy helping sellers position their products better,” he said. “I just really enjoy the opportunity to connect with people.”

Chris has been able to help enterprise salespeople move through the funnel with his creative approach to problem-solving and invaluable insight from his years on the buyer’s side. From rock and roll to technology to altruism, he’s clearly a man of many talents.

Chris Johnson, former director of global enterprise architecture at Harley-Davidson, is a motorcycle-riding, guitar-playing, IT rockstar with over 25 years of experience for organizations like Harley-Davidson and MillerCoors. If you’re selling IT, you’ll want to hear what he has to say about the kinds of services that will sell the most in the future and why building cross-functional relationships with decision-makers may be the best way to sell them.

Get an Emissary for your team today

Contact us to learn how we connect you with former buyers who have worked directly for your key accounts.