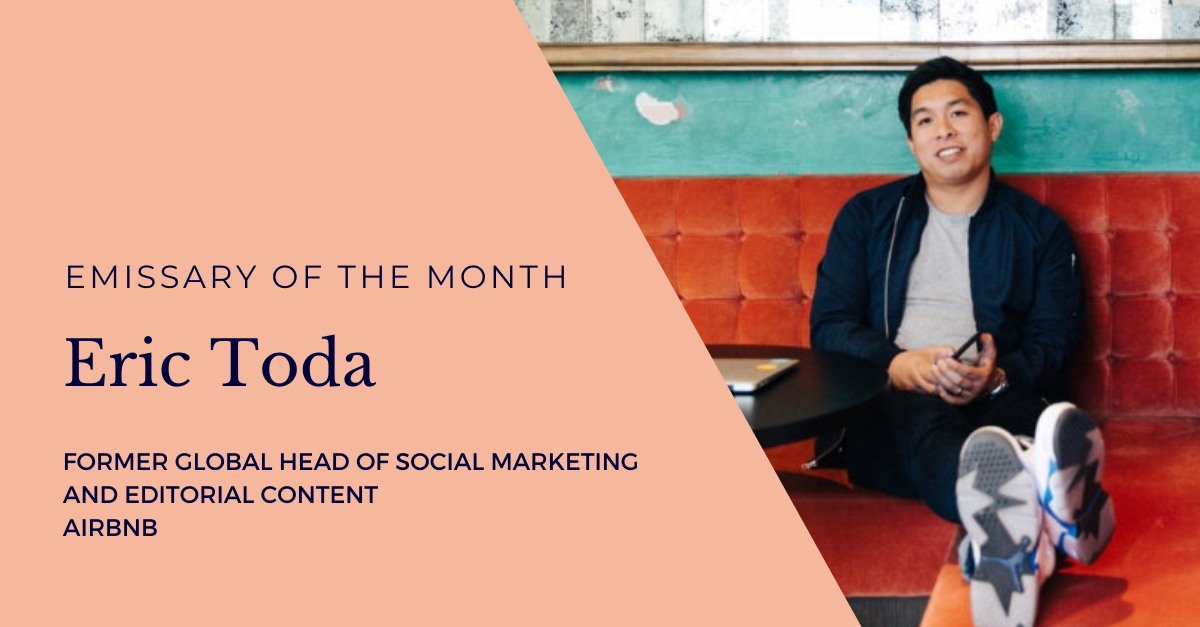 Eric Toda, former global head of social marketing and editorial content at Airbnb, is our Emissary of the Month for May. Eric recently took some time to sit down with us to discuss his work with Emissary, the biggest mistakes he’s seen sales teams make, marketing trends, and the secret to success and happiness in both work and life.

After turning away from his law studies in 2008, Eric applied to over 200 companies. The only one that responded? Facebook. Today, this would be joyous news, a one-way ticket to one of the world’s largest and most influential organizations (and all the free food and dry cleaning a heart could desire). But then, it was still just a start-up, catering only to the exclusive college networks that comprised its user base. Even Myspace and Friendster were bigger, and taking an entry-level job with such a fledgling operation was far from a sure thing.

“I remember saying, ‘It may fail. There’s a high chance that it will fail. But hopefully I can get at least three paychecks so I can ask my girlfriend to marry me.’”

Needless to say, Facebook didn’t fail, his girlfriend said “yes,” and his new career was born.

Landing the job, however, was only the beginning. With no automated system in place, Eric was tasked with manually copying code for ads placed on the site. It was repetitive work, but he credits this experience with giving him the backend knowledge he needed to give the right insight to marketing teams in support of new Facebook initiatives and marketing trends.

One such initiative came in 2012 during preparation for the company’s initial public offering. A team was being formed to develop an ad campaign to celebrate Facebook’s one billion active-user milestone, and Eric was selected to come aboard. The result was the well-known “Chairs are Like Facebook” commercial. Being a part of that team marked a turning point in his career, and he fell in love with marketing—so much so, in fact, that he left the comfort of Facebook to pursue a new challenge and develop his skills further as the head of digital brand marketing for Nike.

“At the end of my time at Facebook, I was so comfortable that I realized I needed to grow outside of it,” Eric said. “I knew I could stay there and live a comfortable life for the next decade, or I could choose to leave and learn new things. It was a risk, because a lot of people who joined Facebook at that time are still there.”

After Nike, Eric continued to grow and challenge himself whenever comfort set in, first at Snapchat, then at Airbnb, and finally at Gap, where he currently serves as the director of marketing. While working across industries can be complicated, Eric chooses to hone in on the one commonality at the core of all their businesses—the consumer—to simplify the process.

To cultivate new skills as a marketer and affect change in areas that have touched his life, Eric remains an active board member for various organizations throughout both the public and private sector. Chief among them is the non-profit Reimagine End of Life. After Eric and his wife suffered a miscarriage, they were distressed to find that there was no real way to talk about their loss due to social stigmas around the discussion of pregnancy issues. By joining an organization like Reimagine End of Life, whose mission is to promote healing through better conversation about death and mortality, Eric hopes to strengthen support communities and make those discussions less taboo.

In addition to Reimagine, Eric sits on the board for Women in Sports Tech, a non-profit focused on providing opportunities for women in the sports-tech industry. Inspired by the mentorship that helped his wife succeed at organizations like Twitter, Eric wanted to help other women succeed professionally and achieve their goals.

Eric’s philanthropic energies also extend to the classroom, where he helps position young professionals for success before entering the workplace. As a regular guest lecturer, with speaking engagements at Stanford, UC Berkeley, and Northwestern, Eric shares much of the knowledge he wishes he’d had before entering the world of digital marketing.

“I fell into this industry,” Eric told us. “I was never educated on how to do this. What I found is that no one is actually prepared to go into digital marketing. I hope to prepare a lot of these students with some of the learning I’ve experienced, so they can take away something that’s actually applicable.”

For Eric, the biggest challenge facing marketers today is being able to move fast enough to respond to rapidly changing marketing trends.

“The CMO and head of marketing roles have gone from storytellers to operators to data scientists to media buyers,” he said. “The consumer is dynamic and is in so many places at so many times, so marketers have to be just as dynamic.”

Given that, it’s no surprise that he credits exposure to new and different ways of doing business as one of the most enjoyable aspects of being an Emissary.

“I’ve been introduced to so many companies doing things that I’ve never heard of, so I get exposure to organizations that are on the frontlines of new vendor relationships,” he said. “I feel like I want to be part of the solution, and I want to educate them.”

His help is particularly felt in the area of cold calling, which he listed as the number one, biggest mistake that sales teams make when approaching him for business—and one of the greatest benefits he can provide as an Emissary.

“If you can educate the head of sales to leverage the right network and the right stakeholders to get into the company, they’ll stand a better chance,” he said. “These companies who are using Emissary will make much better decisions based on insight. Knowing that I’ve added some level of value to these vendors leads me to believe that I have empowered them to be and do better.”

For success beyond the realm of selling, and a principle that has taken him from law school to Facebook to building global brands, Eric recommended thinking hard about what makes you happy and charging at it head first. “Love what you do, and what you do should bring you fulfillment and happiness,” he said.

And if you don’t know what that is?

Eric Toda, former global head of social marketing and editorial content at Airbnb, has had a winding career that started in law school and landed atop marketing’s highest peak. As a digital marketing leader for companies like Facebook, Nike, Snapchat, and Airbnb, Eric’s been in the buyer’s seat before and can tell you what steps to take to sell successfully into the organizations he knows so well. With various non-profit and educational engagements, Eric’s drive and desire to do good extends beyond marketing and marketing trends, and his commitment to sharing knowledge makes him an exceptional Emissary to know. 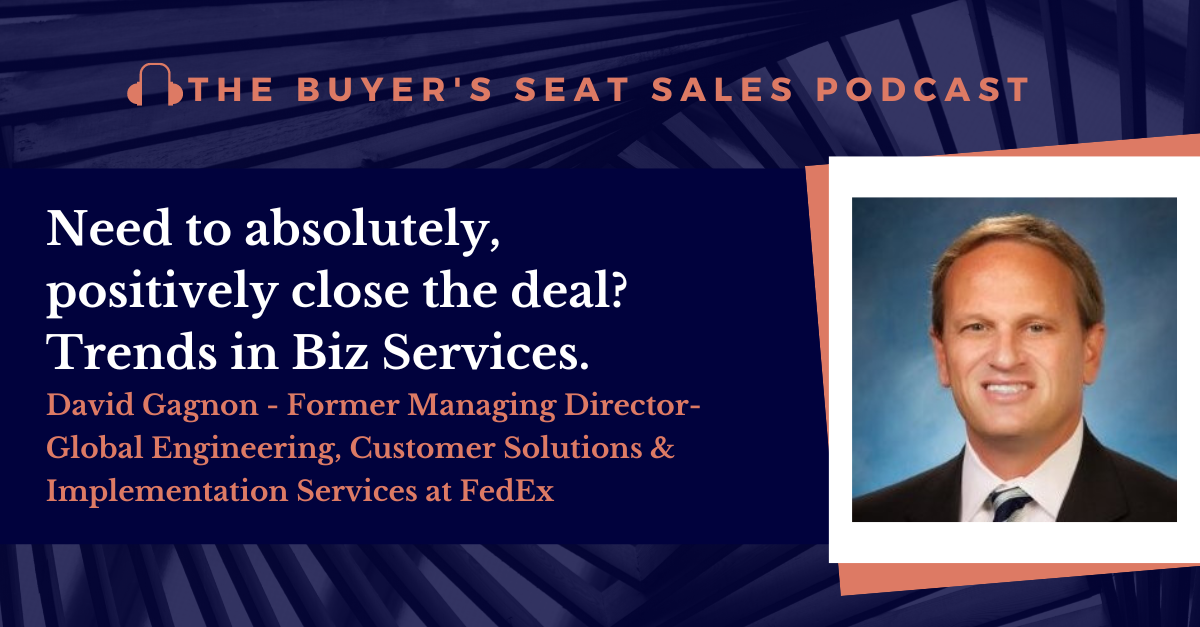